Stroke survivor Bud gets his wheels 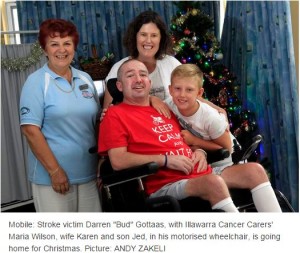 survivor Darren “Bud” Gottaas can go home for Christmas thanks to an early gift from the Illawarra Cancer Carers.

The 41-year-old had childhood leukaemia and specialists believe a weakened artery caused by radiation treatment triggered the seven strokes he suffered over 11 days in February this year.

motorised wheelchair would give him back some independence.

“He’s been making slow but steady progress at Port Kembla Hospital but we’ve only been allowed to take him out for short periods of time,” Mrs Gottaas said.

“The specialised wheelchair is allowing us to take him home for six days over Christmas which will be amazing for me and for our nine-year-old son Jed.

“We think the wheelchair will make Bud feel a lot more independent, and that’s the thing he struggles with most - having to depend on people.

“We really think it will have an amazing effect on his emotional state, as he has had difficulty controlling his emotions since the strokes and has a tendency to cry a lot.”
See your ad here
Mrs Gottaas said it had also been an emotional time for the family, and especially Jed who always tried hard to make his dad laugh.

“Jed said he’s looking forward to being able to sit on his daddy’s lap as he gets around in the wheelchair,” she said.

“We used to be an active family and I think this will help us get out and about as a family once again - we can go to the park, walk along the bike track or even go shopping together.

“It’s going to make such a difference.”

Mrs Gottaas gave thanks to the Illawarra Cancer Carers group, which presented the family with the $15,000 wheelchair on Monday afternoon.

“They’ve been wonderful - getting to know Bud and finding out his needs, talking to his occupational therapist and different wheelchair companies to see what would suit him best,” she said.

“Bud’s communication is improving and I know he’s grateful for the support and is looking forward to being more in control of where he wants to go.”

Mrs Gottaas also praised the staff at Port Kembla Hospital’s rehabilitation unit, and cannot wait for the time when her husband can come home for good.

Trained volunteers work in conjunction with the medical staff of the Illawarra Area Health Service offering practical,emotional and physical assistance to cancer patients and their families in areas that are not covered by other organisations.